We decided to all have a sleep in today as we only had such a short distance to the next station stop. Ben couldn't sleep in as he had decided to ride to Exmouth and back today which would be an extra 200 kms. He plans to return to Bullara for the night, we should see him coming in late.

Annie then announced as she had had such a terrible nights sleep over the last couple of nights, she had decided to ride straight through to Coral Bay and have 3 nights in a bed. Hopefully she will be able to get a bed for tonight as we had been told that this is high season and beds are scarce. This will make her ride around 100 kms today.
Collis had promised eggs and bacon for breakfast but he had neither until the station manager provided us with a dozen eggs. So breakfast consisted of last nights leftovers, an egg or two and some of our sausage. Theo cooked his own but the others, Mark & Woody, Collis offered to cook it for them. In the meantime I was packing up before I took off on the bike. I was unaware of the offer to cook the meal for them so I was a bit annoyed to see these two sitting back while Collis cooked instead of giving me a hand. I briefly expressed my annoyance and then was told by one of these gentlemen, in no gentlemanly way, to eat the breakfast myself. This was very upsetting as it was totally uncalled for.
Collis had requested everyone not to leave until 10 am but I was allowed to go earlier as I am so slow. Unfortunately once I took off everyone decided it must be OK to leave earlier so Joan was the only one to leave after 10 as she had gone out on 2 walks early. 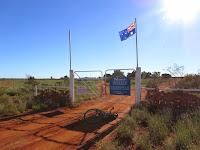 I was planning on doing the whole distance today and headed off down the 4 km dirt road only to come off the bike once and the bike hit the ground but I didn't thank god. Theo and Chris passed me just as I was getting onto the highway and Georg had already passed me. So I happily pedaled along today with only Annie coming up behind me, riding with me for a while but I was conscious of her need to get to Coral Bay for a bed so suggested she goes on without me.
Collis came across me at the 30 km mark and checked I was OK before taking off after Annie to give her her backpack with a change of clothes etc. I made it into camp by 1130 hrs- it had taken me 3 hours to casually pedal the 37 kms. Pat on the back to me. The road surface was still rough and difficult to cycle on, there were quite a few long sand dune hills and we were climbing most of the ride, the wind was usually across us (but not in our faces). The scenery was mostly low shrubs with the usual dead bits in it. I saw emu prints in various places but no actual emus. The lack of wild life this trip is very noticeable and is causing me some concern for our children.

I was ready for morning tea when we arrived but everyone else was ready for lunch- so I had a bit of both. Nice chocolate safeway biscuits that disappeared very quickly. Then I wanted to try out the outdoor shower here so this was a very pleasant experience and if Melbourne was hotter then I would definitely be pushing for one in the backyard.
Collis got us a donger as a treat and also so that we could have the use of the bush kitchen and fridge otherwise there was no electricity or fridge for the campers. The dongers are very pleasant with comfortable beds, bottled water, homemade soap, a rechargeable torch to find our way to the toilets in the middle of the night. The dongers are lined with corrugated iron and come with a fan and flow through air. Very nice.

Everyone just relaxed on the verandah or in their tents for the afternoon. A BBQ has been organized for tonight's dinner and we have been told the meat is their own animals and very fresh. I heard a cow mooing this afternoon, I hope this isn't our dinner. 2 lovely horses keep coming across to visit us but we have no vegies left to feed them with- it all went in last night's curry. 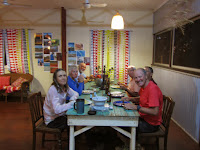 The BBQ went well with nice salads made for us and we got to cook our own meat. We should have thought about some sort of dessert but we forgot and we went without. Ben got back to camp around 5.30 pm exhausted. He had to ride 80 kms into a head wind on the way back but he was determined to get in before dark as he had no lights on the bike. Sounded like Exmouth may not have been worth the effort but Pebble Beach sounded nice. I've never seen Ben so exhausted and he had ridden a total of 239 kms today.
Message came through from Annie to say she got some accommodation at the caravan park in the staff quarters. She is still coughing so is planning on staying there for 3 nights so she doesn't keep the others awake. Very thoughtful!